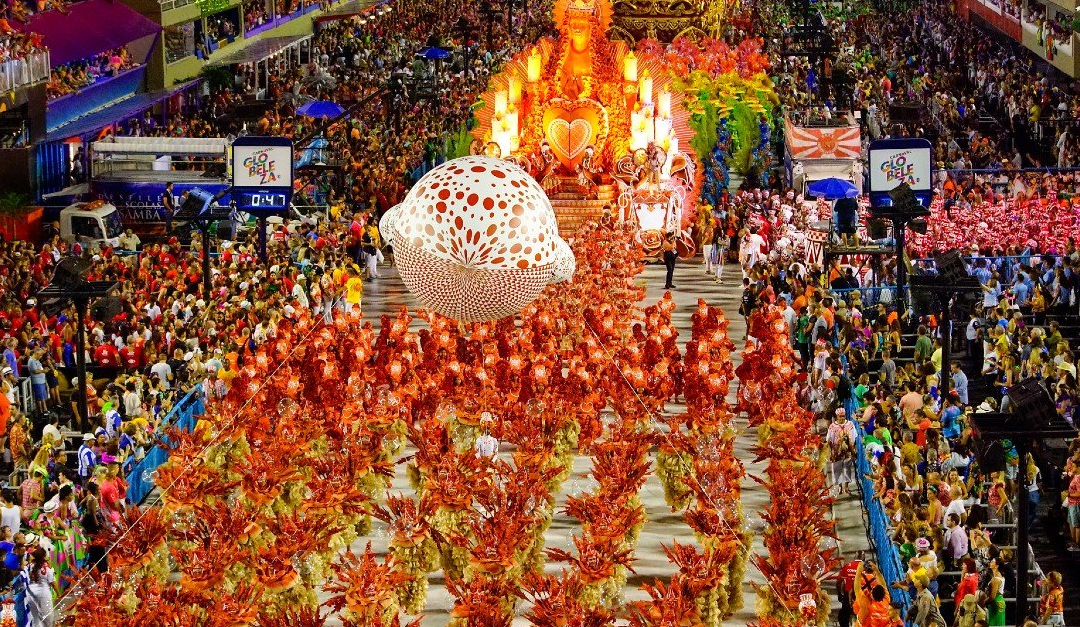 In Brazil, Carnival is a national holiday, but also a REALLY big deal. Did you know that Brazilians plan the festivities for months in advance? And although it is held all over the country, celebrations differ a bit by region, and the Carnaval at Rio de Janeiro is the most popular, drawing crowds of 500k foreigners annually from across the globe. The date of the carnival in Brazil is flexible and varies according to the calendar: it is held annually for a few days before the beginning of Lent, the 40-day period of fasting, abstinence and repentance that’s observed by the Roman Catholic Church before Easter and the origins of the name Carnival go back to this relation. The word derives from the Latin carne vale or “farewell to the flesh”.

In 2023, the the Samba Schools’s Parade at the Sambadrome, in Rio de Janeiro (known as the Biggest Show on Earth), which normally takes place in the last week of February, or the first of March, is scheduled for February 19 and 20. Tickets to watch the parades are available, so, there’s still time to pack your bags and came to Carnaval Rio de Janeiro!

The Carnaval Rio de Janeiro Parade at the Sambadrome: how does it work?

Each one of the  12 samba schools chooses a particular theme (tributes to historical events, great characters of Brazilian culture, political themes, Brazilian traditions, etc) and for months in advance the local communities of each escola works manually in the assembly of the entire parade.

When the parading days comes, it’s time to walk in the Sambadrome (which fits up to 90,000 spectators), and for nine hours a stretch, an army of thousands costumed revelers enters the stage, with an orchestra, multiple multistory floats and featured riders, and many required alas, or sections, including drummers, flag bearers, dancers and “whirling ladies,” each precisely arranged and dressed alike.

On each float comes a top performer, wearing the school’s featured costume, which might weigh up to100 pounds (45 kilograms), meaning this person sometimes is lifted to the perch via crane. Floats also feature more seminude beauties, feathered or glittering, some topless or G-stringed girls, or wearing nothing but artful body paint (the ultimately Carnival outfit). Floats may have special effects, like light shows or massive bubble blowers, and though although they have engines, much of the motion power is done manually by school participants.

The event is run and judged by Brazil’s official samba league, that watches carefully for any missteps, such as parade over time limit, dancers falling out of sync or sections going off their mark. A winning school is announced on the last night of Carnival, and the top six schools perform again the following weekend in the winners’ parade, also at the Sambadrome.

The Sambódromo [Sambadrome] is one of the many buildings of the most important architects of all times, the Brazilian  Oscar Niemeyer. The place was built in 1984 and the idea was to create a permanent stage for the biggest show in the world.

The samba schools in Carnaval Rio de Janeiro are probably the most well-known aspects of Carnival, and these attract tourists from around the globe. For four nights, various samba schools perform with well-decorated floats and thousands of dancers wearing elaborate costumes. These are accompanied by musicians playing lively drum sections. And they happen all night long until the morning, come rain or come shine!

To enjoy it, you can either follow the parade or just watch the view from the stands (the best tickets are usually sold months in advance, so if you want a seat, make sure you buy it in advance). Besides the beauty of these parades, they are also usually cultural representations. These escolas often use costumes, big floats, and original samba songs, to explore history and even offer social critiques of various subjects such as politics, social inequality, or even the environment.

If you’re attending to watch the parade, the rule is just to be as comfortable as possible in your Carnival Outfit. As you must know by now, the general temperature during Brazilian Carnival is QUITE hot, and it can get pretty humid especially with the number of people in the Sambadrome and on the streets. Choose light clothes such as sleeveless tops made of cotton, to allow air to cool your body. On your feet, wear sandals, or, better yet, flip-flops. There are already a lot of stylish versions of these slippers that you can actually proceed to parties immediately after the carnival parades.

But do you know you can participate in the performances? It means you can wear the fabulous costumes and walk through Marquês de Sapucaí Avenue (yes, the Sambadrome is an actual avenue) with revelers and musicians covered in feathers, multicolored layers and lots of glitter (much like de Trinidad and Tobago Carnival, but with the Brazilian Twist). Yes, it is possible!

Locals and visitors alike can participate in the parades by contacting the Carnaval Rio de Janeiro Independent Samba School League or each school individually. Tickets to watch the event can be purchased in person at the Sambadrome, or online (with a Brazilian ID), and cost from R$10 for the cheapest bleacher seats at the end of the parade route to over R$5,000 for luxury “suites” with open bar and staff. Prime seats in the central stands (really close to the revelers) go from R$110 to R$1,000, depending on the date and the parade you wish to see.

The street parties are the soul of the Carnival in Rio! The so-called blocos (literally blocks) are groups of individuals who plan street parties during the Carnival in Rio de Janeiro. Their parties are much more casual than the parades in the Sambadrome and the thing is a fever during the 5 days of Carnival holiday in Rio. Travelers must be sure to find – or be found – by a bloco at virtually EVERY corner of the city.

The thing goes like this: each bloco writes a theme song and has a band to play the Samba music. These groups gather in their local hangouts and play percussion music well into the early hours of the morning. The blocos are considered the heart and soul of Rio Carnival and there are blocos popular with singles, others that hold parties suitable for families and still other blocos that are popular with LGBTQIA+.

The watchwords are informality, creativity and joy! To gather in a bloco, just join the group and let yourself be carried away by the magic of sound (and lots of beer). Costumes are almost obligatory, but also much more informal; each person can use the accessories they want.

8 must-see attractions when in Rio for the Carnival

Rio de Janeiro is one of the most beautiful cities on the planet and attracts thousands of tourists every year, not just during Carnival. The tourist options are almost endless and, in addition to its natural beauties, the city has a rich and vibrant cultural landscape, interesting for all types of visitors. While in Rio with GT DMC, we will be eager to provide the most amazing tours to the most important landmarks! We have listed some of the must-see attractions.

The best beaches in Rio de Janeiro attract visitors from all over the world. The immensity of the Carioca sea is its great business card and must be included in the travel itineraries of all kinds of travelers. The hot weather of the region undoubtedly calls for a dip in the sea. The most sought after beaches are located on Rio’s South Zone: Leblon, Ipanema and Copacabana. These beaches can be interesting for different activities, from sunbathing with a beautiful view, to even walking or cycling along the shore enjoying the sound of the waves.

Literally with open arms, Christ the Redeemer, on Corcovado Hill, receives thousands of tourists from all over the world daily. It is necessary to climb 700 meters above sea level to finally reach the peak where the statue that is the city’s postcard is located. Cristo Redentor is located inside the Tijuca National Park and there are two ways to get there: in the licensed Paineiras vans, which departs from different points of Rio, and by the the Corcovado tram.

Escadaria Selarón is located in Rio de Janeiro, between the neighborhoods of Santa Teresa and Lapa. It is an architectural work decorated by the Chilean artist Jorge Selarón, who declared it a tribute to the Brazilian people. The visitation is free and really deserves attention as it is a very beautiful and ought after place. In addition, the place appears in several music videos, for example between artists such as U2 and Snoop Dogg.

Lapa and the best bars in Rio

Lapa is a neighborhood in Rio de Janeiro known for being the ultimate bohemian place, with several traditional bars, nightclubs with live music, dance halls and open-air samba circles below the Arcos da Lapa, a Roman-style aqueduct that you should take the opportunity to photograph. There are options for every budget. It is possible to have a big cup of caipirinha by buying it at street stalls for R$ 15, as you can also order the drink in a more tidy bar around there. But say tuned! In high seasons and holidays, many people look for a bar with cold beers to cool off from the heat in Rio and the availability of tables can be limited, requiring reservations.

Parque Lage do Rio de Janeiro is a park located at the foot of Morro do Corcovado and enchants visitors with its pure green gardens, cultural programs and art exhibitions. Its structure is very beautiful, not to mention the landscape surrounded by greenery and native animals of the Atlantic Forest. The park has free admission and you can enjoy the company of various little monkeys that roams freely there.

You can also see Rio de Janeiro from another perspective: inside a helicopter. There are several companies that offer tours, which last about 30 minutes, flying over the main beaches such as Barra da Tijuca, Leblon, Ipanema, Copacabana, also passing by Arpoador, Sugarloaf Mountain, Lagoa Rodrigo de Freitas, Jockey Club, Jardim Botânico, Christ the Redeemer, and others.

Have breakfast at Confeitaria Colombo

With more than 100 years of history, Confeitaria Colombo is a traditional bakery located in Rio historic centre – today with other branches spread throughout the city, both in Copacabana and Barra da Tijuca, in addition to another one at Galeão Airport departures. Some international pages rank Colombo as one of the 10 most beautiful cafes in the world! And it’s not for less… The place is one of those that are worth visiting for the space itself – but be sure to try some of the old dishes such as Pingo de Tocha or the traditional pastel de nata.

Without a doubt, the ride on the cable car deserves to be included in your itinerary! Few places can represent the essence of Rio so well as the Santa Teresa neighborhood. In Santa Teresa there is history, gastronomy, culture, nature, with one of the most privileged views of the city. Every carioca is proud and fond of the neighborhood.

Carnival is the highlight of summer in Rio de Janeiro, a period of colors, vibes, experiences and moments that will be kept in the memory forever. GT DMC has the best structure and the best itineraries to host your incentive group during this magical season. Get in touch at www.gotogetherdmc.com and start planning today!