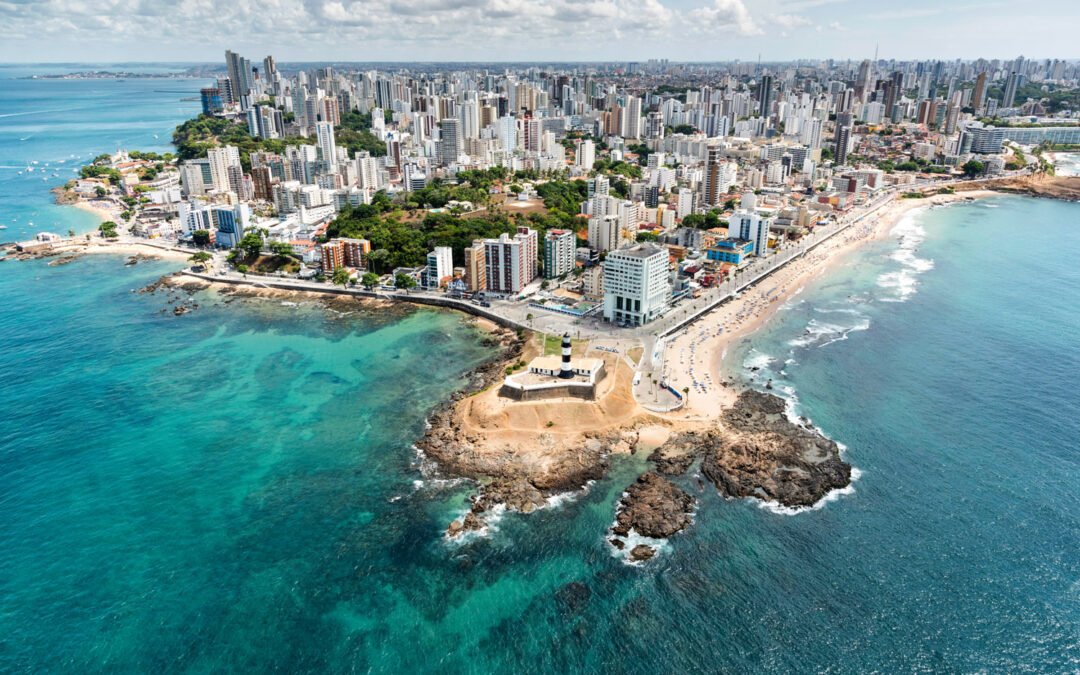 No doubt the biggest and most important travel destinations business centers of Brazil are the megacities of Sao Paulo and Rio de Janeiro. Further afield, most other state capitals full fill their role as the country’s other main economic centers : Belo Horizonte, Salvador, Recife, Fortaleza, Curitiba and Porto Alegre. These are the cities that are dominating Brazil’s economic development.

But Brazil is big and there are plenty of other fast developing cities that have become important business hubs over the years and will be ever more important in the future. They did not get there with soccer tournaments or because they held their state’s government, but by generating strong growth in private sectors such as agribusiness, oil & gas, industries, IT and ports & logistics.

It is no secret that travel destinations Brazil is an attractive prospect for doing international business. The sixth largest country in the world by population and a growing middle class represent a huge domestic market, whilst its natural resources and cheap exports make it a top destination for business partnership opportunities. As with any cross – border business venture, unique differences in culture and the business landscape make a good understanding of your destination vital. The first step in learning how to navigate the field of Brazilian business is getting a firm idea on how the field looks. A good understanding of the political and economic environment is vital. If you are thinking about doing business in Brazil, we listed some of the most promising cities for business in Brazil in 2022

Second city with the highest number of startups in travel destinations Brazil, with 9.5% of the total, Belo Horizonte reveals a strong innovation ecosystem. The city is one of those that most use the tertiary sector, mainly in the areas of financial services, real estate, public administration and areas related to commerce. It is a great destination for those who want to invest.

Belo Horizonte  it is behind only Sao Paulo (SP), which concentrates 35.3% and remains ahead of Rio de Janeiro (RJ) and Curitiba (PR), with 5.7% each, according to the Ranking 100 Open Startups. Also among the top 20 are those from Minas Gerais: Uberlândia, in the Triângulo Mineiro, in 11th place, with 1.2% of startups ; and Juiz de Fora, in Zona da Mata, in 14th place, with 0.5% of the total.

The city is the birthplace of the first startup community in Brazil, the San Pedro Valley. In addition, it has one of the best structures for business tourism and is above the country’s average in the evaluation of the National Tourism Competitiveness Index, carried out by the Brazilian Ministry of Tourism.

Minas Gerais is the second state with the most startups in Brazil, after Sao Paulo. After Santa Catarina, it is the region with the most startups for R$1 billion in GDP. 60% of these startups are in the Capital. According to Minas Gerais Investment and Foreign Trade Promotion Agency (INDI), Belo Horizonte has 70% of the Minas Gerais IT market, with around 5 thousand companies, with annual revenues of R$ 2.3 billion, generating approximately 33 thousand direct jobs.

This developing city is a hub of Brazil’s mid-tech and engineering industry as well as IT. Joinville is close to Sao Francisco do Sul port and Parana’s state capital and business hub Curitiba and has one of the highest standards of living in Brazil. Owing to its development and good infrastructure, Joinville has also become a major center for events and business conferences. The city is central to some of Brazil’s largest software companies such as Datasul, Logocenter, Microvix and SoftExpert as well as many other large corporations in Brazil such as Tigre, Embraco  Dohler, Whirlpool, Wetzel, Busscar and Ciser.

Joinville airport serves domestic flights. But in the immediate vicinity (one to two hour’s drive) of Joinville are three other airports: Navegantes, Curitiba International and Florianópolis International. Most of Joinville’s inhabitants are of German descent, as the city was colonized by a society from Hamburg, Germany in the 1850s. It also attracted many Swiss, Norwegian and other Europeans. Joinville has plenty of universities, like FCJ (Faculdade Cenecista de Joinville), UDESC (University of the State of Santa Catarina), Univille (University of the Region of Joinville), UFSC and many others.

The capital of the state of Parana occupies the 4th place in the ranking of Brazilian capitals in number of economic establishments. According to the Annual Social Information Report of the Ministry of Labor and Employment, there are approximately 157,400 formal companies active in 2019, which represents a 51% growth in the total number of establishments since 2002.

The service sector is responsible for 58.5% of the total establishments in 2019. The percentage of the service sector shows that Curitiba follows the trend of large cities in the world, where regional economic development involves the expansion of this sector.

Also famous for tourism, Curitiba is a very favorable city for business opportunities for entrepreneurs. The city of Parana is one of the most entrepreneurial in Brazil and stands out for its access to capital, infrastructure, innovation, human capital and regulatory environment .

Basically, Curitiba is one of the examples of what should be done to reduce bureaucracy in starting a business. With the Descomplica Program, the State of Parana registered the opening of 129 thousand new companies in the first 8 months. Therefore, it is a great region to open branches or start a new business.

Only 13 kilometers separate the beauties of Niteroi from the Marvelous City. A visit would already be justified by the beautiful view that you have of the biggest tourist spots in Rio de Janeiro. However, Niteroi is much more. The Contemporary Art Museum (MAC), the Caminho Niemeyer, the Complexo dos Fortes, the well-known Fish Market, the Fashion Pole, the diversified commerce and the excellent gastronomy point to Niteroi as a relevant tourist destination on the national scene.

With the highest MHDI (Municipal Human Development Index ) in Rio de Janeiro, and the second municipality with the highest monthly per capita income in the country, Niteroi attracts many investors from the industrial, financial and commercial sectors.

There are many indices that point Niteroi as one of the best cities in Brazil to live, work and invest. Betting on the productive capacity of its residents and its business potential, as in the naval industry, Niteroi has solidly conquered a prominent place in the Rio de Janeiro and national scenario.

Located in the State of Sao Paulo, this city has the best IDHM in the country, according to the 2010 UN ranking, and is in the 48th position in the ranking of cities with the highest GDP in the country. The main economic activity is focused on the automobilist and industrial sectors. Commerce appears next, as the most sought after economic activity in the city.

Another highlight of this municipality is the reduction of bureaucracy for opening companies. The city also has less bureaucracy for expansion in hospitality, which is a good business opportunity for entrepreneurs in such segment. With a privileged location and municipal administration aligned with the city’s universities, Sao Caetano do Sul is a main business destination in Brazil.

The FecomercioSP disclosed in a study that shows that, if Sao Paulo were a country, it would be in 48th place in the ranking of the largest economies in the world, close to Portugal, Vietnam and Peru, for example. The city has already achieved higher positions, being 43rd in 2015 and occupying an impressive 36th position in 2013.

In addition, 63% of all international groups headquartered in Brazil are located in Sao Paulo. Another interesting fact is that the city occupy the 6th position in the ranking of municipalities that have the largest number of billionaires in the world, according to Forbes Magazine data.

With the occurrence of the covid-19 pandemic, corporate tourism was strongly affected. After lockdown decrees, several companies adopted home office models and started to hold their meetings online. In addition, the closing of international borders made it impossible to enter and circulate within many countries and, as a result, numerous flights were cancelled.

Data from the World Tourism Organization (UNWTO) points out that world tourism fell by 70% in the first eight months of 2020 compared to the previous year. It is estimated that this drop corresponds to a loss of US$ 730 billion to the tourism sector. A survey published on the website The Hustle shows that, due to the drops in business travel, airlines lost about US$ 35 billion in the year 2020.

Such data show the impact caused by the pandemic on tourism. Corporate travel has been greatly affected, even more so by the fact that companies use online meetings as a resource. In view of this, a scenario of uncertainties was configured, which put the future of business travel in check.

The development of vaccines and the advancement of vaccination programs all over the world enabled the economic reopening and the resumption of operations in several sectors. Within the corporate travel segment things are no different; the latter reacted and presented a constant and gradual growth in the resumption of activities.

According to the Brazilian Association of Corporate Travel Agencies (Abracorp), in 2021, the segment achieved a 96% increase in revenue compared to the previous year. In addition, it ended the year with total revenue of R$4.370 billion, equivalent to 40% of 2019 revenue (R$11.388 billion).

Thinking about this return, it is essential that companies carry out good travel management, considering the main changes and new rules, so that corporate travel achieves its key goals. In this regard, corporate travel agencies have a great differential as they are attentive to the biggest changes in the market and are able to find the best solutions based on preventive measures.

With the good prospect of corporate travel resumption, we listed some tips to make this return more practical, pleasant and organized for all companies and their travelers.