Enjoy an Axé Music experience in Bahia with Olodum! 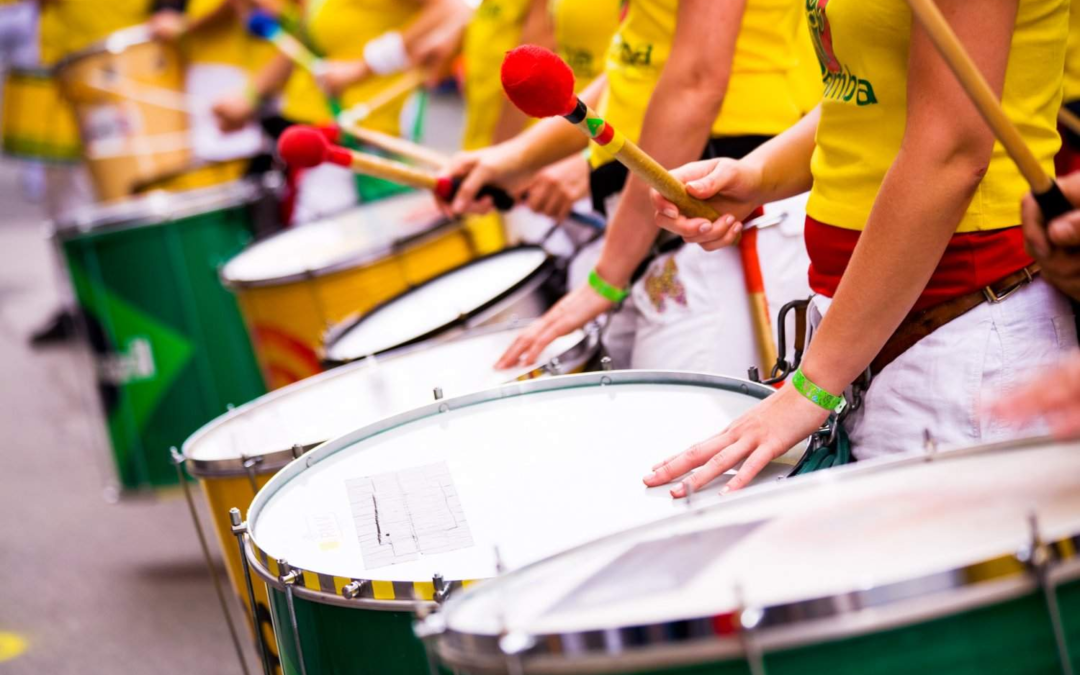 Brazil is known worldwide as a land of vibrant cultural manifestations, like Axe Music. From Joao Gilberto’s Bossa Nova to Anitta’s funk, Brazil is the home of great talents of world music. But it is impossible to talk about Brazil without talking about Bahia and impossible to talk about Brazilian music without mentioning one of the most important musical genres in the country that, not by chance, emerged in Bahia. Of course we are talking about Axé music, a genre from the 1980s and directly linked not only to the world-famous Carnival of Salvador, but intrinsically connected to Brazilian culture in general.

You’ve certainly heard of names like Ivete Sangalo, Carlinhos Brown and Olodum, three of the greatest international expressions of this very Brazilian genre. But the truth is that axé music is much more.

A rhythm born on the streets of Salvador

Have you ever heard of the famous electric trios that command the energy of Salvador‘s Carnival? It all started under the baton of musicians Dodô and Osmar, in the 1950s, and the new invention took to the streets of Salvador, drawing huge crowds. A 1929 Ford served as a stage for musicians to bring the music to the audience. The electric trio was born that brought the Pernambuco frevo on electric guitars. Over the years, the carnival with this new format has gained prominence not only in Brazil, but worldwide.

It didn’t take long for this invention to be definitively incorporated into the Bahian carnival. That’s when the carnival blocos appeared, followed by the Afro blocos. Until today, Bahian carnival is a product of many interferences, especially Axé music, which came to appear as a musical identity itself.

As the rhythm gained forces in the Bahian music scene, it began to appear as a recurring expression in the national music circuit. The word “axé” is a religious greeting used in Candomblé, an afro Brazilian religion, and it means positive energy. A current expression in the Bahian musical circuit, it was attached to the English word “music” by journalist Hagamenon Brito in 1987 to form a term that would pejoratively designate that sexy dance music with international aspirations.

According to the journalist, the explanation for this was the very universality of the rhythm, but it also pejoratively designates its sensual dance movements. Dirven by media, Axé music quickly spread throughout the country, with the holding of off-season carnivals, the so-called micaretas.

What are the main instruments of Axé Music ?

What are the characteristics of Axé Music ?

Dancing music, swing and African-based culture are Axé’s trademarks music. But it is not difficult to confuse some characteristics with other typically Brazilian styles, such as samba, pagode, arrocha and so others. That’s because Axé music is a style formed by many other rhythms. This miscellaneous musical genre, which is the sheer face of Brazilian culture, has evolved and won the world with songs like “Obvious Child”, by Paul Simon. In 1991, Olodum played together with Paul Simon to 750,000 people in New York.

Then it was the turn of the King of Pop to be enchanted by the swing of Bahian music, straight from Pelourinho. This time, it was Michael Jackson who came to Brazil to record “They don’t care about us”, also featuring the super axé percussion band Olodum .

Axé Music: Into the rhythm

Released in 2017, the documentary “Axé: Canto do Povo de Um Lugar”, available on Netflix, tells the whole story of Axé music and brings together great names of Bahian music in revealing interviews. The genre, which today is worldwide celebrated and considered a cultural heritage of Brazil, for a long time was a reason for great controversy, mainly due to the content of some lyrics. Artists of the genre were often (and still are) treated with great prejudice, even being responsible for extraordinary numbers for their labels.

The documentary explains in great detail the creation of the rhythmic cells of Axé music and how varied and rich this musical style is. The contribution of important names to Brazilian music, who started the scene in Salvador, can also be seen in the documentary, and a good example is Neguinho do Samba, who, alongside Olodum, for over two decades already represented our culture and the country, attracting names of international expression, such as the aforementioned Michael Jackson.

In the documentary it is possible to understand how the creation of the new musical genre also has started the Salvador’s carnival industry as it is known today. The strength of axé music and its artists made possible the expansion of the party, which until then was always on the sidelines of carnival celebrations in other states of Brazil, especially Rio de Janeiro and Pernambuco.

After a long hiatus due to the Covid-19 pandemic, Olodum’s performances on the slopes of the Pelourinho neighborhood, in Salvador, are back! Since February 2022, the Largo da Tieta has been the stage for one of the most traditional events in Brazilian culture. It is worth mentioning that these presentations take place throughout the year, not just during Carnival. Being very close to a percussion band like Olodum is to live a unique experience, which will certainly be inked forever in the heart of each one. But not so many travelers know that it is also possible to take place in it and play the drums!  Salvador offers a wide range of Axé music percussion classes and workshops for beginner groups, a true immersion into the heart of Bahian and Brazilian culture.

Go Together, your 100% Brazilian DMC, has all the expertise needed to provide a legitimate Bahian Axé music experience for your team! Contact us right now and get to know everything about Bahia!

Extra: check out this Spotify playlist with the best Axé music songs!