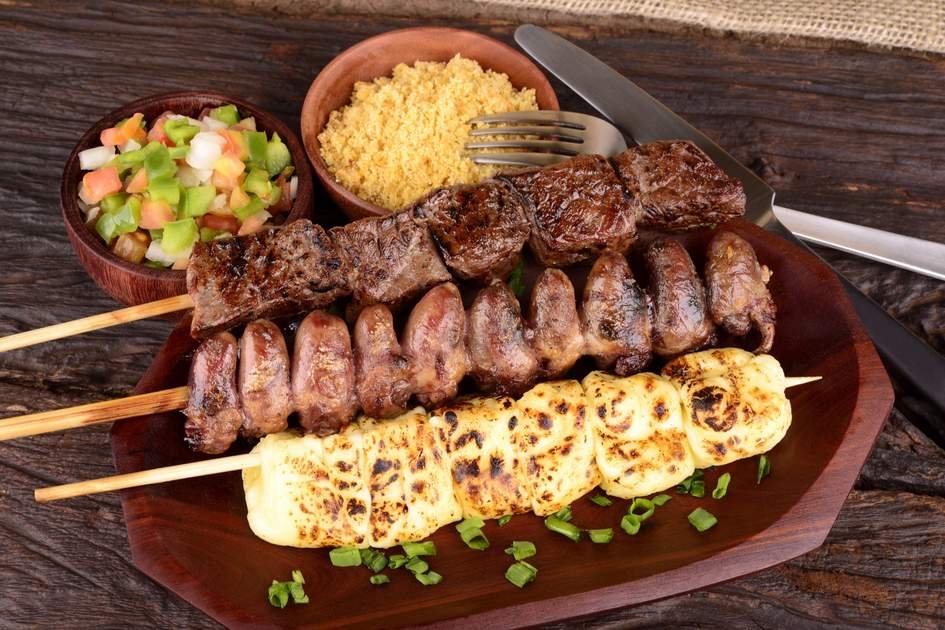 Brazilians are immensely proud of their multi-ethnic heritage. It’s a country inhabited by people of widely diverse backgrounds, from Africa, Asia, Europe and the Middle East, along with more than 200 indigenous populations who also come from vastly different regions ranging from the Amazon’s rainforests to the savannas of the Cerrado to the watery Pantanal. The settlers´ culture and traditions mixed with indigenous Brazilian culture to bring about the melting pot we see today. All of their culinary wisdom has mingled to create a typical Brazilian food so special that delights the most diverse palate.

A considerable cultural contribution was their gastronomy; it is plain to see that different influences continue to permeate current Brazilian cuisine today. Slaves taken from Africa to work in the sugar plantations left their mark, influencing the names of many Brazilian dishes. In the same way, the native Indigenous legacy remains important, in particular with the contribution of cassava flour, a staple ingredient in the cuisine of Nordeste and Amazon.

Fun facts about the Brazilian cuisine

Get to know 8 delicious Brazilian dishes

Brazil and Argentina both claim to be South America’s barbecue champion. And while each country takes a different approach to it, from the cuts to the accompaniments, some things remain the same – namely, the ogre-sized quantities of meat, best appreciated at a leisurely pace and with an elasticated waistband. In Brazil, premium cuts (the most popular being picanha, or rump cap) are seasoned with no more than a liberal shake of coarse salt, before being grilled to pink perfection over charcoal (or wood, if you’re doing it the old-fashioned Southern way). Home barbecues will see sausages, queijo coalho (squeaky cheese on a stick) and chicken hearts sharing space on the grill, while in churrascarias (barbecue-style steakhouses), all manner of meats on skewers – from pork to lamb and wild boar – will be sliced by waiters straight onto your plate.

SUPER TIP! In the vibrant São Paulo you can find great churrascarias [steak houses] and much more. Read our blog  and get your way around the huge variety of restaurants in the city.

Dating back to the 1500s, cachaça is made from fermented sugarcane juice and is best known as the fiery kick in caipirinhas – Brazil’s national cocktail. While caipirinhas are often made with uncoloured, unaged cachaças, there are thousands of better-quality golden varieties available, aged in wooden barrels and sipped straight up by aficionados. For the morning after, clear your head with a Guaraná (a sweet, fizzy soft drink), an água de coco (coconut water, best sipped straight from the coconut) or a caldo de cana (freshly pressed sugarcane juice).

Pão de queijo is a typical Brazilian food, a snack originally from the states Minas Gerais. It is unknown exactly where and when it originated, but perhaps around the 18th century, during the Brazilian slavery period, in the “fazendas mineiras” (farms located in the state). Pão de queijo can be enjoyed at any time of day. Crispy on the outside and soft and chewy on the inside, the gluten-free bread rolls are made with tapioca flour, eggs and grated curado minas cheese (a cow’s milk cheese from the state of Minas Gerais), rolled into small balls. For a naughty twist, keep an eye out for pão de queijo served stuffed with cream cheese or various meaty fillings.

A must-do program if you go to Salvador, Bahia, (but also easily found in all major cities) is to eat Acarajé. The dish has an African origin, the word Acarajé originates from the Iorubá language: Àkàrà means fireball and Je means to eat. It’s a dumpling made with black-eyed beans, fried in palm oil, and stuffed with shrimp, vatapá (a creamy paste made with dry shrimp, coconut milk, peanuts, and palm oil), caruru (okra stew that also takes shrimp), and pepper sauce. This delicacy is typically sold by the ‘Baianas of Acarajé’, dressed in traditional clothing. The typical Brazilian food originated in Bahia, in Brazil’s north-east, where flavours have strong roots in African cooking. Acarajé is at its best when served piping hot, fresh from the vat of oil, with a liberal dash of chilli sauce.

Feijoada is one of the Brazilian main dishes you can find the most and is eaten in every corner of the country. The word feijoada comes from the word feijão, which is Portuguese for beans. Feijoada is a black bean stew that is brewed with a variety of salted and smoked pork and beef products from carne-seca to smoked pork spareribs. The more traditional feijoada also includes “cheaper” cuts such as pig’s ears, feet and tails, and beef tongue. The rich, smoky stew is then served with rice, sautéed collard greens or kale, orange slices and topped with toasted cassava flour (farofa). Most Brazilians go out to restaurants and bars to eat feijoada, and it is traditionally eaten on Wednesdays and Saturdays. The meal is just as warm, comforting, rich and vibrant as the music, people and culture of Brazil.

SUPER TIP! Rio de Janeiro is known for supposedly being the home of origin of this Brazilian delicacy. Discover more about the wonderful city’s cuisine here.

Super-food açaí is traditional in Brazil, especially in coastal cities where it is a common post-beach snack. Try it plain as sorbet, or ask for banana, strawberry or granola to be added in to take it to a whole new level of tastiness. Açaí can also be found as a smoothie, a juice, in powder or even added into a main meal using its raw, berry form.

Originating in Ceará state, one of the most famous northeastern dishes in Brazil is Baião de Dois, an unbeatable combination of rice and beans, which can be green, black-eyed, or cowpea. In the recipe, rice is prepared in the already cooked bean broth, being a great way to use leftover beans. The ingredients can vary according to the region, the most common being bacon, dried meat, coalho cheese, cilantro, and chives.

These little chocolate caramels are possibly THE most known, most popular and most loved Brazilian party treat. Ask any Brazilian and they will confirm. Brigadeiros are like a Brazilian chocolaty treasure, so sweet and gooey it is (almost) impossible not to love (they are cloyingly sweet for some palates). This simple dessert is made with just a handful of ingredients, mainly salted butter, condensed milk and chocolate powder mix, widely used in Brazil. It is possible to make brigadeiro with cocoa powder too, but there is a slightly different process and recipe for it.

GT DMC knows the best gastronomic itineraries in Brazil and works with the best local suppliers. Contact us and prepare your team to live experiences of incomparable flavor on a delicious trip!