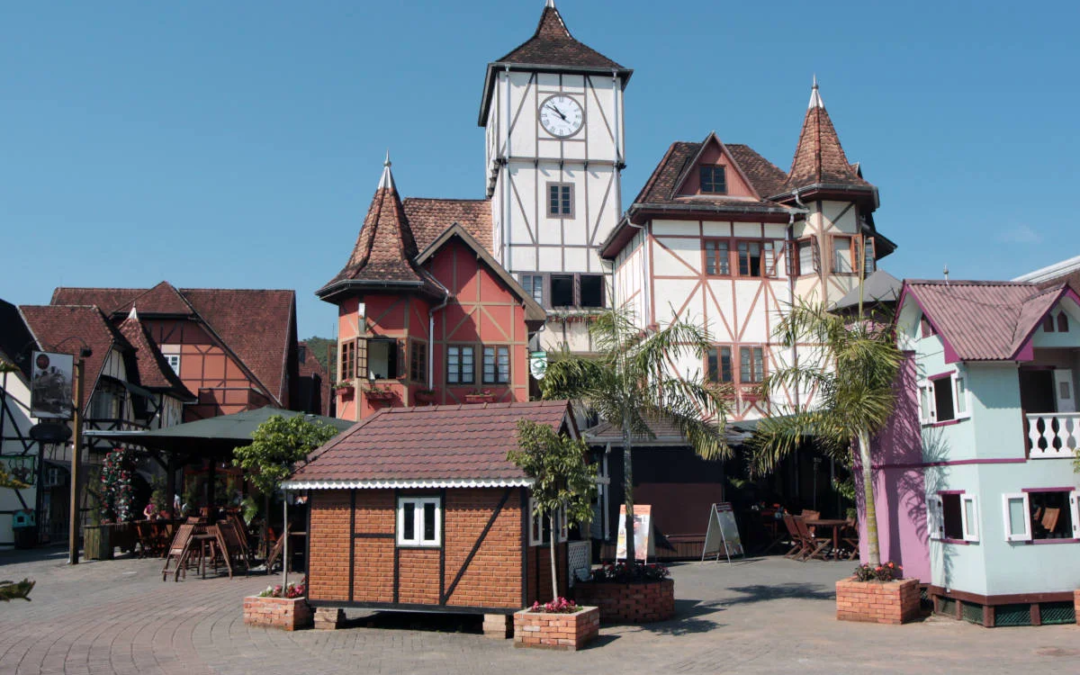 To be a little piece of Europe in Brazil makes the historic city of Blumenau a popular destination for Brazilians and guests from all over the world. Located in Vale do Itajaí, in the south state of Santa Catarina, Blumenau is home to the Brazilian edition of Oktoberfest, one of the biggest beer festivals in the world. The Santa Catarina version is the second largest in the world, losing only to the original Munich’s itself!

Blumenau enchants for its half-timbered architecture, for its gastronomy with typical German dishes and for its famous special breweries, making the city one of the main tourist attractions in Latin America for beer enthusiasts. But anyone who thinks that there aren’t many options outside the brewery tour or off festival season is completely wrong. The third most populous city in Santa Catarina offers attractions that can be visited all year round!

A bar made entirely of ice, a 15-meter-tall Christmas tree with flags from various countries, a village of elves, toys and a direct connection to Lapland, the land of Santa Claus, are some of the novelties on the Christmas radar in Blumenau in 2022. This is just part of the event schedule, which will be open to the public from November 17th to January 15th.

A little bit of Blumenau’s history

Historically, the Blumenau region was inhabited by Kaigangs, Xoklengs and Botocudos Indians and, even before the foundation of the Blumenau Colony, there were already families established in the Belchior region, on the banks of Ribeirão Garcia and the Itajaí-Açu River.

In 1850, the German philosopher Dr. Hermann Bruno Otto Blumenau obtained from the Provincial Government an area of land to establish an agricultural colony with European immigrants. On September 2, 1850, seventeen settlers arrived at the place where the city of Blumenau stands today. Many other immigrants crossed the Atlantic Ocean on sailboats owned by private companies and thus the number of farmers, settlers and cultivators of the lots, measured and demarcated along the rivers and streams that bathed the concession territory, grew.

In the beginning, the Colony was owned by the founder, Dr. Blumenau. In 1860 the Imperial Government took over the enterprise and Dr. Blumenau was maintained in the direction until the colony was elevated to the category of municipality, in 1880. In a few years, Dr. Blumenau, endowed with great energy and tenacity, made the colony one of the largest colonizing enterprises in South America, creating an important agricultural and industrial center that was influential in the country ‘s economy.

With its approximately 350 thousand residents, one of the main highlights of Blumenau that attracts new ones is the high quality of life. The municipality has a Human Development Index of 0.806, which is considered very high and places it in the twenty-fifth position of the best Brazilian cities to live in.

How to get and how long to stay in Blumenau?

Blumenau is located in the state of Santa Catarina, 150 km away from the state capital, Florianopolis. The closest option for those who want to get to Blumenau by plane is Navegantes International Airport (NVT), 55 km away.

Blumenau offers an easy tourist route, with no major obligations to fulfill. This small city can easily be explored in a day or two. In the others, invest in visits to neighboring towns in the region, to the friendly cities of the Enxaimel Route and even in a stop at Beto Carrero World, the largest amusement park in Latin America. With five or six days in Blumenau it is possible to fulfill a vast itinerary of activities, and we are not just talking about the number of breweries!

And speaking of them…

The main breweries found in and around Blumenau are: Eisenbahn , Bierland , Cerveja Blumenau , Container British Beer and Wunder Bier, all in Blumenau; Schornstein in Pomerode; Das Bier in Gaspar; Handwerk in Ibirama; Zehn Bier in Brusque; Berghain , Blauer Berg and Borck in Timbó; Hei m at in Indaial; Königs Bier in Jaraguá do Sul; Holzweg in Otters; and the Bier OPA , in Joinville.

Even today, walking through the center of Blumenau, especially by the Rua XV de Novembro, it is still possible to see some buildings inspired by the half-timbered style, although they are largely reproductions (there’s just a few remains of the old and original buildings). Even so, locals insists on maintaining typical German traditions and it is practically impossible to think of Blumenau detached from its Germanic features.

The biggest icon of the city of Blumenau, and a favorite place among tourists who come to the city, is Parque Vila Germanica. The place, which works as a convention center, is the stage for the Oktoberfest and also for large fairs, such as the Brazilian Beer Festival. The good news is that Vila Germanica remains open year-round to the public. The space reproduces a small village in the interior of Germany and offers several shops and bars for those who want to get in the mood of the region. It is a mandatory tourist spot, especially for the good variety of draft beer and typical foods.

Of course, the restaurants in Blumenau present in their dishes the traditional and wonderful flavors of German cuisine, such as pork chop (Kassler), pork knee (Eisben) and a variety of sausages, which have adapted to Brazilian seasonings, making the local cuisine irresistible.

In Blumenau there are many excellent restaurants, mainly at Vila Germanica. There are several possibilities to satisfy your hunger and the desire to try the delicious dishes that enrich the local culture, such as the Senac Blumengarten restaurant, Moinho do Vale, Bier Vila, Abendbrothaus and Sabor Imperial.

Another unmissable stop to put on your itinerary are the museums of Blumenau, such as the Beer Museum, the Colonial Family Museum, the Habits and Customs Museum, the Hering Museum, among others. They are important to know a little about the history of the city. The museums are not big and it is possible to visit several in one day.

When to go to Blumenau ?

The high season in Blumenau is marked by the Oktoberfest period, which always takes place in October, of course. The 4,000 beds available in the city usually sell out months in advance, making it practically impossible to go to the event at the last minute. If your company group wish to join the big group of beer revelers that seeks Blumenau for Oktoberfest, it is recommended to rely on the service logistics and organization of a proper DMC. When everything is set up, dress up everyone in German outfits, buy them a nice mug and get everybody ready for a wonderful marathon of good draft beer washed down with large doses of happiness.

The second largest Oktoberfest in the world is Brazilian

Oktoberfest is one of the biggest popular festivals on the planet. The ultimate celebration of German culture, original from Munich, receives millions of visitors every year and has given rise to several other versions, such as the one in Blumenau. The Santa Catarina version is very popular (it is the peak period of tourist occupation) and every year attracts thousands of tourists for the great 19-day long party. The 2022 edition attracted 600,000 visitors from Brazil and the world.

The party takes place both inside and outside Vila Germânica and the Traditional German draft beer in huge mugs is present everywhere, in a wide variety of styles. Each one of the three Oktoberfest pavilions hosts different attractions. On stage, bands play typical German music (and other non-typical ones as well) and competitions take place such as choosing the best typical costume and who finishes drinking the metro beer the fastest. On the ground, the beer lovers are the showrunners, often amusingly dressed in costumes. And if you really want to get in the mood, be sure to get some accessories and clothes when you arrive in Blumenau.

Although it is officially headquartered in the exhibition park, it is on Rua XV de Novembro that the party begins. On site, there is a parade of typical clothes and beer cars, a great Germanic carnival and one of the highlights of the Oktoberfest.

As the last edition has just taken place, this is the best time to plan for Oktoberfest 2023! Get in touch with our travel experts at www.gotogetherdmc.com.br and get to know our options for Blumenau!