Discover the rich beauty of the golden Ouro Preto, Brazil 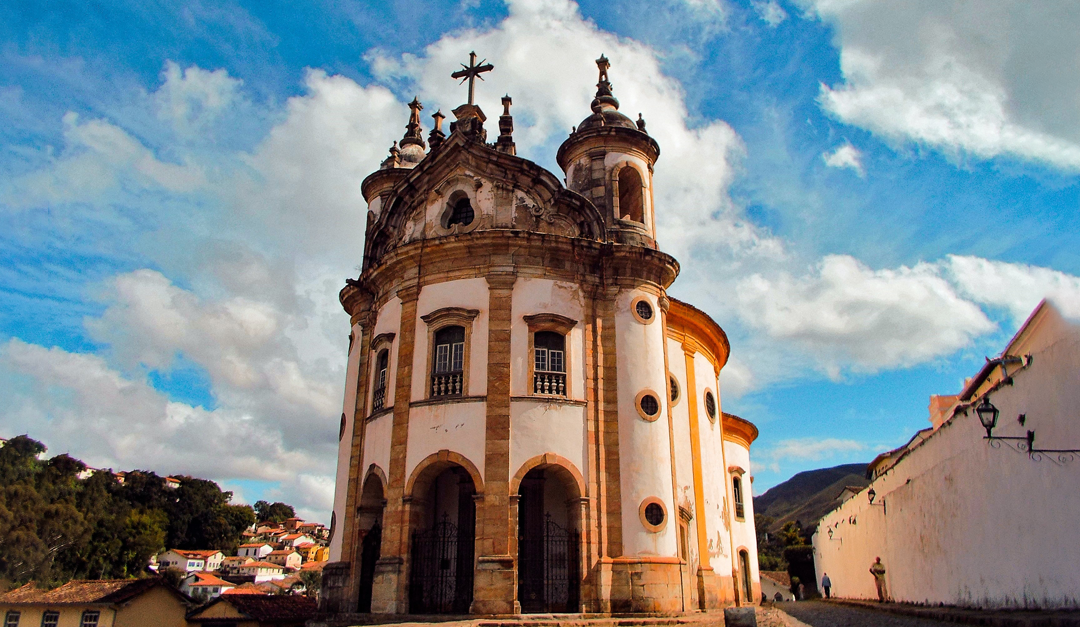 Traveling to Ouro Preto, Brazil, is a true immersion on history and the formation of this beautiful and culturally rich country. The city teaches at all times how the country was built and each part of this charming mining town is absolutely special. Traveling along the winding road that leads to Ouro Preto, in the state of Minas Gerais, travelers can testimony the incredible view of Serra do Espinhaço. The rise and fall of the mountains heralds the beautiful and bucolic scenery that surrounds the ancient city of Vila Rica. Between the natural landscapes of Pico do Itacolomi and the baroque churches of the 18th century, sunlight finds space and illuminates the colonial mansions that take over centuries-old slopes.

Ouro Preto breathes the Brazilian colonial period and walking through its cobblestone streets takes us straight to the past, when the city became one of the most important in the country. The city was once the scene of the incessant gold mining race and intense work of enslaved people from Africa. Today, it guards an important part of the history of Brazil and receives thousands of visitors in search of some of the most beautiful tourist attractions in Minas Gerais.

Ouro Preto was also the first Brazilian city, and one of the first in the world, declared a World Heritage Site by UNESCO, acquiring such status in 1980. Famous for its exquisite colonial architecture, the city was built by artists and slaves, in the heyday of the Gold Cycle. Its great historical value as a stage for the Inconfidência Mineira (an unsuccessful separatist movement in Brazil in 1789) and its expressive historical complex are not the only attractions of the city, which also benefits from an intense cultural activity, in addition to the rich ecosystem that surrounds it, with waterfalls, trails and a huge area of native forest. Its imposing and silent churches contrast with the jovial and cheerful atmosphere provided by the contagious movement of students and tourists, always willing to celebrate on the city slopes.

Trivia: Where does the name of the city comes from?

The curious name of the city, which directly translates as black gold, was adopted on May 20, 1823, when the old town of Vila Rica acquired its municipality status. “Ouro Preto” comes from a dark kind of gold, covered with a layer of iron oxide, found in the region.

What to do Ouro Preto?

The profusion of churches from the Brazilian Baroque period is Ouro Preto’s biggest attraction – those looking for a more complete and informative visit can hire a guide at the Tourist Assistance Center, located in Praça Tiradentes. In the Nossa Senhora do Pilar Church [Igreja de Nossa Senhora do Pilar], from 1733, the incredible amount of gold in its altars stands out (more than 400 kilos) as the richness of details of its altarpieces. On the six side altars, each of the brotherhoods and social groups of the time are represented. On the ceiling, pay attention to one of the arms of the cross in the figure of the Lamb of God, which seems to change sides as you walk.

Designed by Aleijadinho, the São Francisco de Assis Church [Igreja de São Francisco de Assis], from 1810, was declared in 2009 one of the seven wonders of Portuguese origin in the world. The artist was also responsible for the medallion on the facade and the lavatory in the sacristy – a piece of soapstone that impresses with its richness of details. The main altar, the panels, the side frames and the ceiling of the nave, which creates the illusion that the ceiling projects into infinity, are by Mestre Athaíde.

The staircase that leads to the Nossa Senhora do Carmo Church [Igreja de Nossa Senhora do Carmo] allows appreciation at its fullest. Designed by Manuel Francisco Lisboa, Aleijadinho’s father, the church enchants visitors even outside, where the facade has beautiful features and baroque angels. The 18th century construction is among the most beautiful in Ouro Preto, Brazil, and historians consider the possibility of an intervention by Aleijadinho himself in the final project.

A fundamental visit to understand the development of the city, its main characters and its importance in the history of the country, the Inconfidência Museum [Museu da Inconfidência] is located in the building of the former Chamber and Jail House. The rich collection runs over 16 themed rooms. There is also a collection of sacred art from the 18th and 19th centuries, a room with sculptures by Aleijadinho and another with paintings by Mestre Athaíde .

The Casa dos Contos, from 1784, is the former weighing and smelting house for gold mined in the region. In addition to the oven that melted the gold to turn it into bars, the house displays furniture from the 18th and 19th centuries, documents and old books. From the same period, the Municipal Theater [Teatro Municipal] is considered the oldest in operation in the Americas, with a certificate from the Guinness Book. The Chapel Museum [Museu do Oratório] has well-appointed spaces and a rich collection with more than 160 oratories from the 17th to the 20th centuries.

Another must-see attraction is to take a ride on the train line that connects Ouro Preto to Mariana. Built in 1883, it was revitalized and received tourist wagons (common and panoramic, these air-conditioned and with larger windows) in 2006. During the 18 km journey (about an hour), the right side is the best option to see waterfalls, mountains, canyons and the city of Ribeirão do Carmo.

Abundant in the Ouro Preto region, some gold mines are open to guided tours – the heyday of mining activity occurred between the 17th and 18th centuries. Among them are the Jeje mine and Santa Rita, where it is possible to schedule night tours with stories of hauntings.

When should I visit Ouro Preto, Brazil?

The city receives tourists throughout the year, but if you are looking for stable weather and no rain, the best time to visit Ouro Preto, Brazil, is from April to September, when the nights are cold, the days start with fog, but soon the sky is blue. appears and the temperature becomes mild.

How do I get to Ouro Preto, Brazil?

From Belo Horizonte, the best route by car is via BR-356. By bus, there is a wide range of timetables from BH, as well as from Rio de Janeiro and São Paulo. Uber rides are also available from Belo Horizonte.

How long should I stay in Ouro Preto, Brazil?

Ouro Preto, Brazil, is the typical destination that can be visited in one or ten days. Located just 100 km from the capital Belo Horizonte, the city a great choice for a day trip and also for days of intense immersion in the history and art of Brazil. But in 3 days you can easily visit the main attractions of the city and enjoy the best of the town!

Enjoyed discovering a little more about the enchanting Ouro Preto? We can provide the perfect schedule for your team experience. Contact Go Together DMC right now and start planning.